Retinyl Palmitate (Just When I Thought.....Part 2)

In this post I wanted to address the claim from the Environmental Working Group's (EWG's) sunscreen guide that retinyl palmitate is a toxic ingredient.

What is retinyl palmitate?
Retinyl palmitate is an ester, consisting of vitamin A and palmitic acid. It is included skin care preparations as an antioxidant and cell regulator. It is also approved by the FDA for use as an additive in food, as well as a supplement. For our purposes we'll be focusing only on its use in sunscreen.

Claim: Vitamin A in sunscreen causes skin damage and is can cause skin cancer.

This is good time to introduce a term called "cherry picking".

"Cherry picking has a few different definitions, but it is most often thought of as the process of selecting a small amount of information or data to attempt to prove a point, while ignoring contradicting information. When cherry picking information, a person may end up with a faulty theory or position on a topic because all relevant information was not considered. A person might choose information in this way either on purpose or inadvertently, such as when a person might inadvertently only look at data that is easy to find, presenting a false impression. The term is more commonly used with someone who purposefully ignores contradicting information, however."

The first claim is that retinyl palmitate is carcinogenic. The implication is that the FDA funded National Toxicology Program (NTP) study from 2000 showed this to be true. Here are the problems:


I believe the concerns about retinyl palmitate are not supported by the science. But, if you only read the cherry-picked elements out of the studies that the EWG presents, I see how it could be alarming at first. Bottom line? Retinyl palmitate was, is and will continue to be a valuable ingredient in our arsenal of chemicals used in skin care formulations. I've linked to all the complete studies above and listed some additional sources below if you want to dig in. Next up is Oxybenzone! 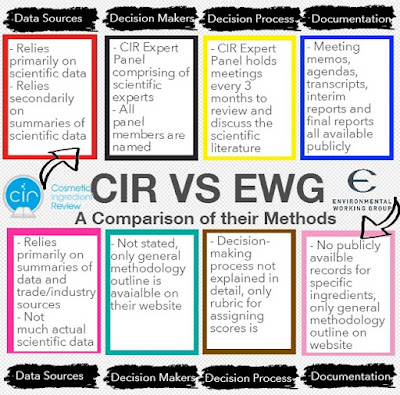